Paper on Ethiopia in China’s Belt and Road Initiative

The seminar was organised by the Institute of World Economics and Politics (IWEP) of the Chinese Academy of Social Sciences (CASS).

The Belt and Road initiative (BRI) is the master project of President Xi Jinping and it is guiding China’s foreign policy. The BRI originally aimed at the development of a massive network of new overland and maritime transportation routes that improve connections across the Eurasian continent, from Beijing to London. Within a few years, however, the BRI has evolved into an almost world-spanning China-promotion project, facilitating Chinese investments not just in infrastructure but in a wide variety of industrial sectors.

The seminar brought together Chinese IWEP academics and a group of experts who participate in a BRI network coordinated by the International Institute for Asian Studies (IIAS), at the University of Leiden. The papers addressed questions such as to what extent the BRI competes with current global governance institutions, and how the BRI investments influence individual countries. Case studies were presented on China itself, on Afghanistan, Hungary, the Western Balkan, and Africa.

Jeroen van Wijk’s presentation dealt with China-Africa relationships and addressed the question as to what extent the Chinese BRI investments in Ethiopia help the country industrialise. China is expanding its sphere of influence in the Horn of Africa along one of the world’s most important maritime trade routes. Chinese companies have been massively investing in infrastructure and in industrial parks in Ethiopia. China also recently opened its first foreign naval base in Djibouti, and extended the Port of Djibouti with several commercial specialty ports meant to facilitate the export of minerals and goods produced in Ethiopia. Jeroen’s empirical study concludes that the Ethiopian government has so far been able to moderate the expansion of the new super power in its country. “The Chinese investments do fit the industrialisation strategy of Ethiopia, which aims at the improvement of infrastructure, the development of an export-oriented manufacturing sector, and better access to a sea port (Djibouti). I did not find indications of a ‘debt-trap’, but the good bilateral relationship may put Ethiopia in a dilemma at the level of international institutions, should the Chinese and western governments disagree on sensitive subjects and Ethiopia has to choose sides.” says Jeroen.

The paper of Jeroen, together with all the other papers presented during the seminar, will be published as a Routledge book by the end of 2020. 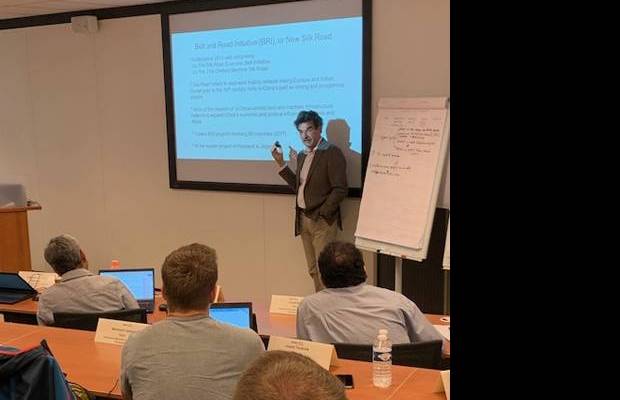