From 5 until 9 February 2018, MSM supported a Female Talent Development Training, which was conducted in Maastricht. This training was a follow-up to a training in Jericho, Palestine, which was conducted from 5 to 9 November 2017 for 28 participants from four Palestinian universities (Al Quds, An Najah, Khadoorie and Hebron). 11 female participants were selected for the follow-up training in The Netherlands. Both trainings are part of a project in Palestine, implemented by MSM in cooperation with the four universities.

The objective of both trainings was to facilitate female faculty to obtain leadership positions in their respective universities. The second training had the additional objective of establishing a pool of core trainers, to further transmit the capacity and skills to other female faculty. A highly experienced Palestinian gender expert with a strong link to universities in Palestine facilitated the training together with an international gender consultant.

The training was very interactive in nature. A number of presentations were held, but the focus was on group exercises, debates and collaborative work. An exchange visit was held to the Tilburg University, for the participants to experience gender and female leadership aspects in a Dutch higher education.

During the training, topics like leaders’ identity, gender differences, gendered opportunities and barriers to women leaders, power and power analysis and self-awareness were addressed. The participants worked on developing a shared vision on female leadership and on how to promote it and made a plan to develop a support network.

The final outcome of the training was a further fine-tuned “Action Plan for the Development of Female Talent”, which had been initialised in Jericho. As part of the plan, conducting training for other female faculty in Palestine and supporting and mentoring them in their effort to become leader now was further elaborated and emphasised. The participants acknowledged the action plan combined with the strengthened capacity as a solid basis for strengthened female leadership in Palestinian universities. 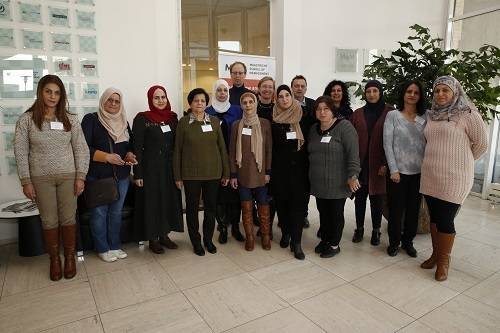