After the millennium development goals that were to be attained in 2015, the UN member states agreed on the 17 Sustainable Development Goals (SDG) that were to act as a blueprint to achieve a better and more sustainable future for all. MSM highly values the SDGs within its institutional capacity-building projects as well as our degree and executive programs. With the importance of the SDGs in mind, we have started the SDG series – ‘Exploring Pathways and Innovation Towards Meeting the SDG’s.’ In this article, we dive into the topic of Renewable Energy which links to SDG 7 “Ensure access to affordable, reliable, sustainable and modern energy for all.”

Stay up to date! Register here and you will receive our latest SDG articles straight in your inbox.

The increasing concentration of greenhouse gases (GHG) such as CO2, CH4, CFCs, halons, N2O, ozone, and peroxyacetylnitrate in the atmosphere is acting to trap heat radiated from the earth's surface and is raising the surface temperature of the earth. This represents one of the greatest environmental threats of our time, and in the future, one of the greatest social dangers as well.

RE is referred to as a clean source of energy, and optimal use of these resources minimizes environmental impacts, produce minimum secondary waste and are sustainable based on current and future economic and social societal needs (Panwar, 2011). Thus renewable energy technologies provide an excellent opportunity for mitigation of greenhouse gas emissions. REs  are energies obtained from sustainable sources such as natural sources or processes that are constantly replenished. As many renewable sources of energy do not burn carbon they have the key advantages of helping reduce CO2 emissions and thus mitigate climate change.

In recognition of this danger posed by climate change and also the importance of energy for livelihood sustenance, the sustainable development goals have put renewable energy as one of its targets under SDG 7(ensure access to affordable, reliable, sustainable and modern energy for all). SDG 7 calls for a more focused attention to improve access to clean and safe cooking fuels and technologies for 3 billion people, to expand the use of renewable energy. Specifically, SDG 7.2 has the target that by 2030, to substantially increase the share of renewable energy in the global energy.

More so, The United Nations (UN) declared the years 2014 – 2024 to be the decade of Sustainable energy for all (UN, 2012). Renewable technologies have rapidly increased presence in most countries since then.

A research carried out by the International Energy Agency (IEA) demonstrated that RE technologies have mainly been adopted by countries with relatively high Gross Domestic Product (GDP) per capita and also high energy security concern (Müller, Brown & Ölz, 2011). These countries have the capacity and the ability to engage with RE during initial stages, when costs are very high. The wealth in these countries afford them the possibility of exploring different technologies for RE generation while developing and emerging countries focus on low cost technologies such as biomass and hydropower.

For developing countries and especially Africa, novel approaches that match the scarcity of knowledge and resources will be needed. Higher education institutes can play a key role in helping  the deployemen of REs.

In this new article of 'the SDG series – Exploring Pathways and Innovation Towards Meeting the SDG's[1], we are going to explore what instutions of higher learning (TVETs and University) are doing to advance the agenda of increasing the uptake of REs.

The study objective and Methodology

We have used a rapid survey approach where a questionnaire was administered to respective offices in the various institutions targeted TVETs and Universities in Eastern Africa. The survey sought to:

The challenges encountered in using REs
The challenges when using RE as reported by the respondents can be broadly categorized as lack of infrastructure, funding, and shortage of technical skills. The maintenance cost seems to be an issue, especially for government-sponsored institutions where the funds allocated cannot sustain the system. Hydropower is specifically known to have frequent power outages. The specific challenges are in the table below. 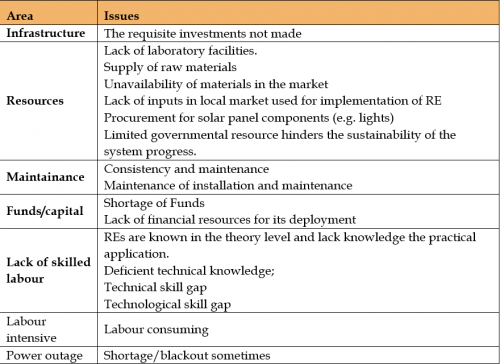 Knowledge Opportunities and Implementation Challenges of REs
The respondents were most knowledgeable on Solar energy, then biogas and hydropower, while marine, geothermal wind energy were rated low. The opportunities to use RE were seen to be high in Biogas and Solar energy as per the respondents interviewed, while wind energy, hydropower and Biomass we rated low to medium. Geothermal and marine were seen as providing very few opportunities.

In terms of the challenges, skills were rated medium, showing that there is need for skill improvement. The cost implication was seen to be high when using geothermal, marine, hydropower  and Solar energy. Policy barrier to implementation of REs were rate low to Moderatre.

We also sought to understand whether students were deployed to do apprenticeships in REs. Most of of the inistitutions did not deploy students to do an apprenticeship in any REs. The higest level of apprenticeship was in Solar where 38% of the instiutions indicated that the students went through an apprenicechip or industrial attachement.

In terms of future plans, less than a third were planning on having REs certification. Moreso, when asked if they had any platforms to anticipate skills needs and adapt to issues related to developing skills for REs, more than three quarters responded no.

Table 4. RE apprenticeships and certification 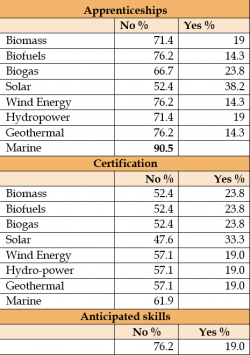 Community Engagement with REs
The majority (57.9%) of the institutions did not deploy RE to the communities. Those that deployed, biogas and solar were the RE that were mostly supported followed by windpower and hydropower. The kind of support needed was mostly technical and educational support. 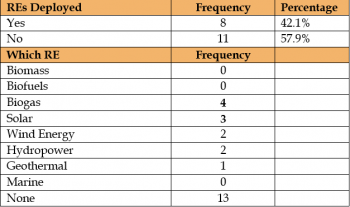 Partnerships
Government is seen to have been the main partner in RE, probably because the institutions are government sponsored; however, development partners and Community based Organizations seem to be among the top planned partnerships.

Basically higher education instiutions are leading the way in using REs, developing the needed skills for deploying REs and also supporting communities to deploy these technologies. However there are challenges. There is a lack of material and financial resources needed to deploys REs, the level of skills and support are low. Cost of deploying REs is a major challenge. All the same significant opportunities are seen in REs especially in solar and biogas while geothermal and marine are not seen as huge opportunities. The reason that lack of opportunity is seen is due to a reflection of challenges with these technologies. Geothermal technologies are very location specific and marine requires high financial investments. Both technologies are therfore more capital intensive.

The institutions offer mostly intermediate and basic courses in REs. There are reflection of resource and knowhow constraints underscoring the need to upscale the capacitity of the institutions.  Also key is the neglect of teaching of entrepreneurial skills which are key. REs by their nature allow for small scale deployement and thus can offer opportunity for graduates to become REs entrepreneurs. The technical skills and entrepreneursial skills should be seen as twio sides of the same coin.

The challenge of low level skills being taught is compounded by the lack of apprenticeship opportunities to complement their gained knowledge. This challenge is also a reflection of low deployement of REs and thus few opportunities. It is key that the institutions of higher education further rethink the approach so that they can support the uptake and deployement of REs by the community so that more opportunities can be created.  Some of this is happenneing as we see that some are engaging the community. However the efforts are low and also narrow, focusing mainly on biogas and solar.

Partnerships can be key to not only help insitiutions upgrade their curricula but more crucially in supporting the uptake and deployement of REs so that the demand can be created for REs skills and entrepreneurship. These partnerships are happening and more are planned and this is encouraging. However we do not see plans for partnerships with the private sector, while especially local artisans can be key in supporting REs deployments. There is a need for triple helix partnerships that will bring the local business, the local government and the instutions together on one platform so that they can pool resources to support the uptake of REs. Government and development partners can provide resources to support REs entrepreneurs. Local industry can be upgraded to be able to install REs and in turn they can provide apprenticeship opportunities for students. Institutions cannot only build the needed skills but also incubate student RE entrepreneurs and research on new business models to faciliatate faster uptake of REs.

Implementation of RE is only as successful as to how well the professionals are trained on the respective technologies underscoring the role higher education institutes will play.  However, as Huenteler, Niebuhr & Schmidt (2014) point out, the spread of RE technologies, especially in developing and emerging economies, is dependent on a combination of global and local learning processes, which in turn depend on the domestic and international policy provisions, local institutions and industrial context.

From the foregoing discussion an number of recommendations can help strengthen the role of HEIs in supporting the uptake of REs. This include:

New Busines Models: HEIs can also develop new business models where they can supply surrounding communities with REs  through micro-grids, solar powered units paid for use etc. In this way poor household need not invest in REs equipment but only buy the power units they need. This will also require buidling internet based platforms that monitor use and also facilitate micropayements via mobile money. The power of this model is that it can also provide apprenticeship opportunities for the students.

Build Triple Helix Partnerships: HEIs can also build triple helix partnerships with the local government and local artisans to develop and deploy REs. They can support local fabricators to fabricate and install REs and also establish mircogrids to supply REs as mini-utilities. Local Government can support through funding and also cash transfers to poor families for buying REs. This model can support the development of student entrepreneurs through attaching them to local fabricators/mini-utilities.

Policy: Policy cannot only create the conducive environment to attract the needed investements but can also create demand. For example mandating that a given share of energy has to be derived from renewables can stimulate demand while a mandate to say to tax CO2 emissions and directing the tax to higher education to research and support community can create both supply of REs and demand.

[1] In this series we aim to give an insight into how countries, organizations or institutes work towards achieving the SDG goals that the United Nations have set. 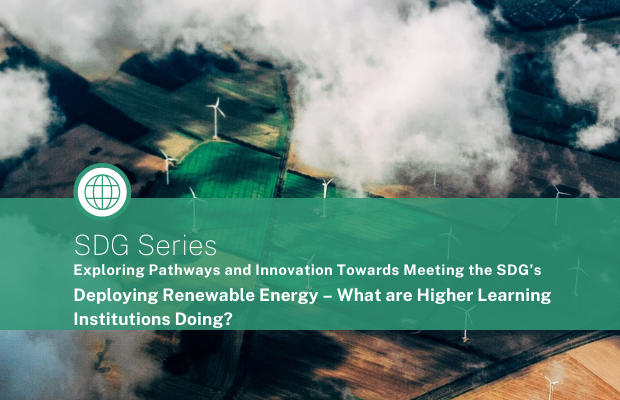