Access to education
Online MBA student Estefania Behrens was born in Venezuela, where she notes that in general for young 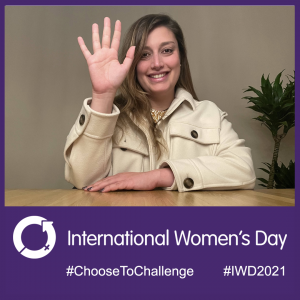 people it is not a priority to have advanced studies: “It is a big challenge for them to dedicate time and invest in a career while the basic needs are not being taken care of. Girls in my country have no other way, but to be fierce. Those that make sacrifices like instead of affording some time off with friends at a café, to buy a book, or instead of enjoying the special treat of a Saturday ice-cream, to work night shifts to pay for tuition as loans do not exist in Venezuela - those are already determined that graduation with determination brings much more in the future.

Estefania herself was blessed by the support and determination of her parents to give her access to education: “I am blessed by having parents that did not have the opportunity to attend a university education and made that their priority for me as a child, to engage in endless hours of hard work as they said: “We want you to have options in life” by letting me choose my passion and support me until the end.”

But she witnessed other girls not having this support: “On the way, I did meet different girls that had the passion, but their parents did not approve for them to be more than just a wife or a mother when they could have done that and more. Other girls simply found it easier to be in a career associated with the gender than to consider themselves in competition or as equal with the opposite gender.”

“...I did meet different girls that had the passion, but their parents did not approve for them to be more than just a wife or a mother”

With on average studying 45 hours a week and working for at least 30 hours, Estefania’s journey as a student has not been an easy one. But that was not the most difficult part, as she explains. “The hardest thing about reaching my goals in Venezuela came after I recognized that my future could be in jeopardy if I did not expand my knowledge compared to the rest of the world. What kind of future could I have in that environment? That is why in order to be truthful to me and our family’s efforts I had to leave the country, and learn and work in countries like the US, Brazil, Mexico and always keep my feet on the ground not forgetting how I got here.”

Personal inequality encounters
Estefania remembers two occasions where she felt diminished. “The first one was while preparing myself to be the only woman invited as a lecturer at a convention where all the other presenters were men. The person in charge told me: “You can be the first speaker because if it is not as impressive as the boys with years of experience, at least people will not be too tired to hear it”. I could have felt it as an insult, but my decision was to let the water run, be calm and surprise them all when the moment was right, and so I did. So much in fact that I ended being invited as a speaker a lot after that.”

The second time that Estefania felt that being a woman was a disadvantage for others, was not so long ago: “It was when my latest boss had the most terrible reaction when I broke the news that I would become a mother. The reaction was: “That is the worst news you can give me.” I once again did not answer or even asked why, because it was clear to me that I was only being seen as a money provider and not as a human being with a personal life. It even opened my eyes to look for another job and, in the end, it was the best decision I made.”

“…it was clear to me that I was only being seen as a money provider and not as a human being with a personal life.”

Choose to challenge
Estefania is a proud and determent woman: “Empowered women never say they are empowered, we simply aim to give our best in everything we do and of course as a woman, we have an advanced level in multitasking. As a proof here I am proud in my heart to be a Wife, Mom-to-be, working as a Dentist and studying an MBA in the Netherlands,” she states. “As a woman, nothing pushes us more than to hear that we can’t do it. There is no specific way, only an attitude to it, which is determination and discipline.”

How the Women Ambassadorship Scholarship and the MBA help
Determination and discipline is also what Estefania needs in the MSM Online MBA and she is more than willing to give her best: “The Women Ambassador Scholarship is the way MSM has given me emotional support by understanding my journey and motivating me to reach the dream of the MBA. This has already made a difference at home, in my work environment and it will continue to dare my capability to give the extra mile in the world.  I deeply think that the impossible just takes more effort.”

“…I deeply think that the impossible just takes more effort.”

Back to the blog